EURJPY despite the recent pullback in price maintains its bullish bias above the simple moving averages (SMAs) and the Ichimoku cloud. The current horizontal Ichimoku lines reflect a pause in price appreciation, while the short-term oscillators suggest some weakening in positive sentiment.

The MACD in the positive region has flattened above its red signal line, while the RSI drifts lower under the 70 level. Looking at the stochastic oscillator, the %K line has deflected off the 80 mark completing a bearish overlap of its red %D line, which proposes that price action may fade before another hike unfolds. That said, traders need to be aware of the positive charge in the 50- and 100-period SMAs and the recent bullish crossover of the 200-period SMA by the 100-period one at 116.67, which may boost further advances.

If price continues to deteriorate, initial support may surface from the red Tenkan-sen line at 118.34 and the 118.13 low. A sustained dive may then encounter a tough limiting region from 117.55 – 117.69, which involves the 50-period SMA and the upper surface of the cloud. Travelling further south, if the section from the trough of 117.00 to the support of 116.85 – which includes the cloud’s lower band – fails to halt the decline, this may trigger concerns of the pair realigning with the short-term bearish bias.

Overall, the very short-term picture remains positively charged with a break above 119.03 needed to boost this outlook and turn it neutral. Yet, only a break above 121.13 may confirm a neutral-to-bullish picture in the short-term timeframe. 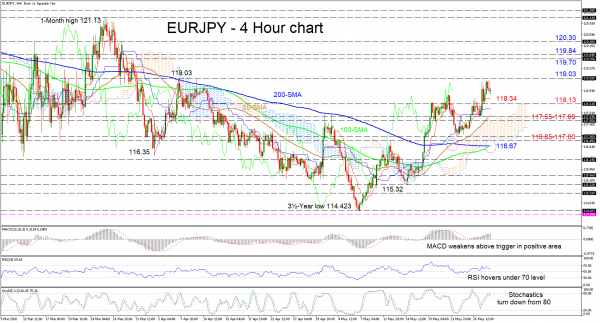